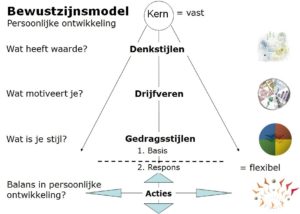 De Zwerm Groep uses the awareness model, which is a simple model to explain how we look at a person in relation to personal development.

We have been using this model in all our coaching and training activities since 2004.

Everyone is born with a core that is fixed and constant, consisting of DNA, chemistry, and possibly much more we do not know about yet. The core defines our body with all its physical and spiritual possibilities. This is what we appear on earth with. 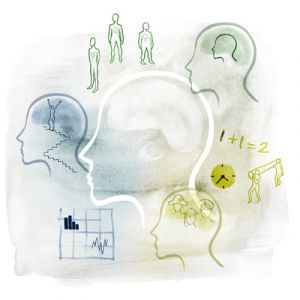 When we are children, crawling, and later walking, around on earth, we acquire experiences and we start to evaluate the world around us in a certain way. These evaluations cause us to already make choices at an early age between what we like and what we don’t like. Some children only want to play outside, others rather stay inside to play with dolls or to dress up and create plays, and yet others just can’t stop playing with Lego. Through these choices we develop our talents.

In this light, an article about Hartman’s theory will appear later. 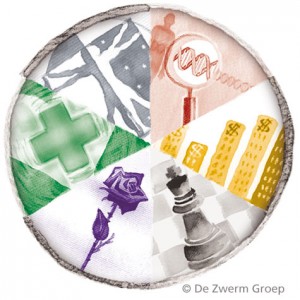 Motives follow from the attitudes a person adopts with respect to the world. These attitudes are in turn influenced by one’s family, upbringing, education and knowledge. For example, you had a very dominant parent who used to determine everything for you when you were young, and you did not appreciate it. This may result in an attitude, a conviction, that you don’t accept decisive people around you who tell you what to do, who control you. Therefore, you now make sure you’re always in control of the situation yourself. An experience from the past can thus make you motivated to take the lead, to exert power.

Motives tell us what drives people, what moves them, what they use their talents for. You can, for example, dedicate yourself to helping others, to creating a better world or to having control and power. 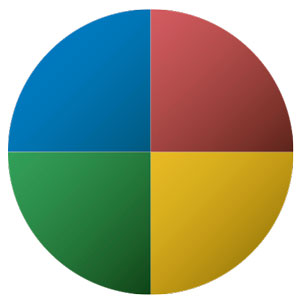 Styles of behaviour are like the tip of an iceberg. You see a person’s style of behaviour, but what lies underneath is hidden and prudence is called for. Someone can appear very supportive in interaction with his environment, but that doesn’t necessarily mean he is motivated to help someone, or to think in a customer-oriented way. There may be other underlying motives or talents.

Styles of behaviour represent a person’s way of doing things, determining for a large part how he cooperates and communicates with his environment.

Someone’s style of behaviour may also differ according to the situation. The style may be fundamentally different than, for example, in stressful situations or in a situation in which someone is forced (by himself or by his environment). This is called a response style.

Read the article about Marston’s styles of behaviour.

The actions a person carries out or the competencies he shows are at the bottom of the model. Someone can, for example, be a competent manager, in which case managing is an action that is carried out successfully.

Using the model, we map out which talents, motives and styles of behaviour a person applies or has available to carry out an action or to show a competency.

We regard development as the discovery of one’s possibilities and of the best way to make use of them. By mapping out talents, motives and styles of behaviour, we create an X-ray, as it were, of these ‘soft skills’. To become aware of them, to start trusting and using them, that is development to us. It is in fact like discovering and becoming yourself.

By regularly reflecting upon this and talking about it, an upward spiral of self-knowledge is created, mixed with experiences and ‘hard skills’ that make sure you will become more and more successful in consciously and with success using your own power and avoiding your own pitfalls.

We will have to choose
The truth or the appearance
You may lose yourself
By never being yourself.]

A poem by Toon Hermans from 24 Rozen.