The innate desire for pleasure

The innate desire for pleasure – Sense of Self.

In my book, ‘Excelling in Freedom | A recipe for personal development’, Plato, Socrates, Hartman and the evolution show us the way to grow. Stories about the development of six well-known persons introduces you to six values and thinking styles that are important for every human being to make personal development possible.

In Chapter 1, Elvis Presley introduces us to the first value and thinking style: the innate desire for pleasure and Sense of Self.

Socrates’ metaphor of the essence of man, a pair of horses and a charioteer. Part of a human being is the innate desire for pleasure, the unruly horse.

‘We will have to choose
between truth or appearances
you can lose yourself
by never being yourself.’

Everyone has an innate desire for pleasure. Everyone is unique. And everyone is intrinsically motivated. In order to clarify this, I’d like to introduce you to the story of how Elvis was discovered. Based on that story, I’m going to show the connection between the belly, the unruly horse, the intrinsic or moral Self, and Sense of Self.

The discovery of Elvis 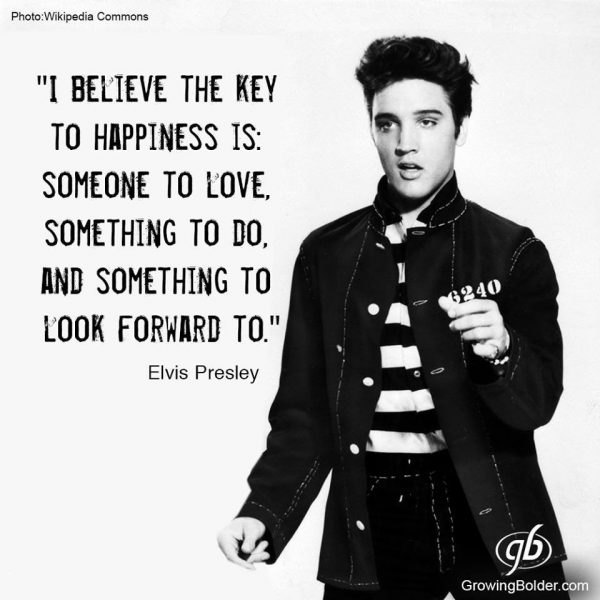 Elvis Presley is about ten years old when he first enters a talent contest. He doesn’t make a great impression and comes in fifth. For his birthday, he gets a guitar and his uncles and a minister give him some guitar lessons. At the age of eleven, Elvis regularly takes his guitar to school to play and sing during his lunch break.
Students think he’s weird. A lonely, sad, shy, unattractive boy whose guitar skills are unlikely to win any awards. He is bullied and is regarded as a sloppy, shabby boy who plays hillbilly music. But Elvis perseveres. Ignoring critical fellow students and their bullying, he continues doing what is valuable to him: making music. According to his high school music teacher, Elvis has no singing talent. He even fails the subject of music. Incidentally, the only subject he ever failed in school. When he participates in a talent show at school, many students do not even know that he also sings. After that performance, he becomes much more popular with his classmates.

Elvis is different from other boys his age. His clothes are different – he’s usually dressed in pink and black. He has pants with a stripe down the length. His hair is longer, greasy and he has a cowlick, not exactly standard then. ‘He was just so different, all the other guys were like replicas of their dads’, according to a friend at the time. Other than that, he has few friends; he hangs out with his cousins a lot. And he and his mother are cheek by jowl.

When Elvis is eighteen, he goes to the Memphis Recording Service to have a record made, intended to surprise his mother. There he asks if they know anyone who needs a singer. Marion Keisker, the secretary and also a DJ on a local radio program, is impressed with Elvis and notes ‘Good ballad singer. Hold’. He comes to the studio quite often hoping that a band is looking for a singer, but nothing happens for over a year. A year later, he records another song in the same studio. At nineteen, Elvis auditions for a vocal quartet, but he is not accepted. ‘They told me I couldn’t sing’, he tells his father. Someone advises him to give up on becoming a singer. That hurts, but it doesn’t stop him. ‘Well, that didn’t work out, let’s go on to the rest of it’, is his attitude according to his girlfriend at the time. Meanwhile, Elvis starts working as a truck driver to make some money. After a tryout with a band looking for a singer, he is rejected. The bandleader’s advice: ‘Stick to driving a truck, because you’re never going to make it as a singer.’

Exactly at that time, Sam Phillips, the director of the Memphis Recording Service, is looking for a new voice. He feels that existing music is too programed, artists too conformist and lacking in authenticity. Therefore, he has founded his studio to work with black, sincere and uneducated artists. Artists with ‘mud on their boots and patches in their overalls… battered instruments and unfettered techniques.’ Sam tells Marion Keisker that if he could find a white, sincere and uneducated artist with the sound of a black one, he could reach a wider audience. And get rich.

In June 1954, Sam invites Elvis, probably due to Marion’s note from the year before. They rehearse, but Sam is not satisfied and asks Elvis to sing some other songs. Something about this affects Sam, so he suggests meeting with two well-known local musicians to hear what they think of Elvis. And to prepare something for a recording session.

On June 4, 1954, Elvis meets Bill Black and Scotty Moore. Bill is a bass player and Scotty is a guitarist. Elvis wears a black shirt, pink pants with a black stripe, and white shoes. He also has a greased quiff. After some awkward chatter, they get down to business. Elvis sits down shyly and hunched over his guitar, mumbling that he doesn’t know what to sing. They play some familiar songs, ballads. When Elvis has left, Scotty asks Bill: ‘What’d you think?’ Bill says, among other things: ‘Well, he didn’t impress me too damn much’, ‘Snotty-nosed kid coming in here with those wild clothes and everything’, and ‘Well, it [the singing] was all right, nothing out of the ordinary – I mean, the cat can sing…’ Scotty calls Sam to share their findings. Despite their questionable impressions of Elvis, Sam wants to make a recording in the studio to hear how it sounds on tape.

On July 5, 1954, at 7 p.m., Sam, Elvis, Scotty and Bill meet in the studio for the recording session. Sam asks the musicians what they want to play. They play several well-known songs by well-known artists. But without success. Elvis is shy and Sam has to put him at ease all the time. Sam feels the emotion in Elvis’s voice, but it just doesn’t come out. Songs are sung over and over again to Elvis’s great frustration. When it is already late in the evening, they pause. They consider stopping because everyone has to go back to work the next day.

Scotty and Bill are drinking coke. Sam is busy in the control room. And Elvis suddenly starts singing a song he has heard years before. Scotty says about this afterwards: ‘All of a sudden Elvis just started singing this song, jumping around and acting the fool, and then Bill picked up his bass, and he started acting the fool, too, and I started playing with them.’ Sam pokes his head around the corner in surprise and asks what they are doing. The song is That’s all right from 1946 which Elvis is singing at that moment in his own unique way. Sam is immediately hooked. This is the sincere, uneducated, authentic sound he has been looking for for years. It is fresh, exuberant and of unabashed originality. It is different, ‘it was itself’. Three days later the song is played on the radio and the king of rock and roll is born.

The above story is a summary of the first 95 pages of the 1994 book “Last Train to Memphis, The Rise of Elvis Presley” by Peter Guralnick.

The soul as two winged horses with a charioteer (Socrates) The story of Elvis’s discovery is a wonderful example of how a person continues to appreciate and believe in himself. Despite the disapproval of his guitar playing, his singing, his looks and his clothes, despite the many rejections and bullying.

The story also shows how Elvis is seen by the outside world: an unruly adolescent, a snotty-nosed kid. Someone who doesn’t conform to what others do or don’t do. Elvis takes up the space he needs in order to be himself. To be his own unique self. Even though he doesn’t know how to express it, he continues to have faith in himself. The search takes years. Many people want to see him perform in a way that was common at the time, the way it was done then. If he hadn’t met Sam Phillips in the end, it’s doubtful we would have ever heard of Elvis at all. And the same is true of Bill and Scotty. What if they hadn’t joined in right away with the sudden onset of That’s all right? But most importantly, of course, Elvis continued to believe in himself. He valued his feelings strongly and continued to follow them.

The above text is the first section of Chapter 1 – Who am I?
Are you curious about the other chapters and sections? Check out the table of contents on this website.

Excelling in Freedom | A recipe for personal development

With my book, ‘Excelling in Freedom | A recipe for personal development’ I hope to inspire you with a vision of personal development. And to encourage you to gain more self-knowledge and become more aware of yourself, so that you can (further) develop yourself. I am convinced that people who are more aware of themselves also become more aware of their surroundings. This has a positive effect on the environment, which changes with them. In this way, you contribute to a more beautiful world. All chapters invite you to write down the activities you have to do with the purpose of growth. Together they form the ingredients of your recipe for personal development. To become more human, contribute to a more beautiful world, and take small steps to respect and enhance the freedom of others. 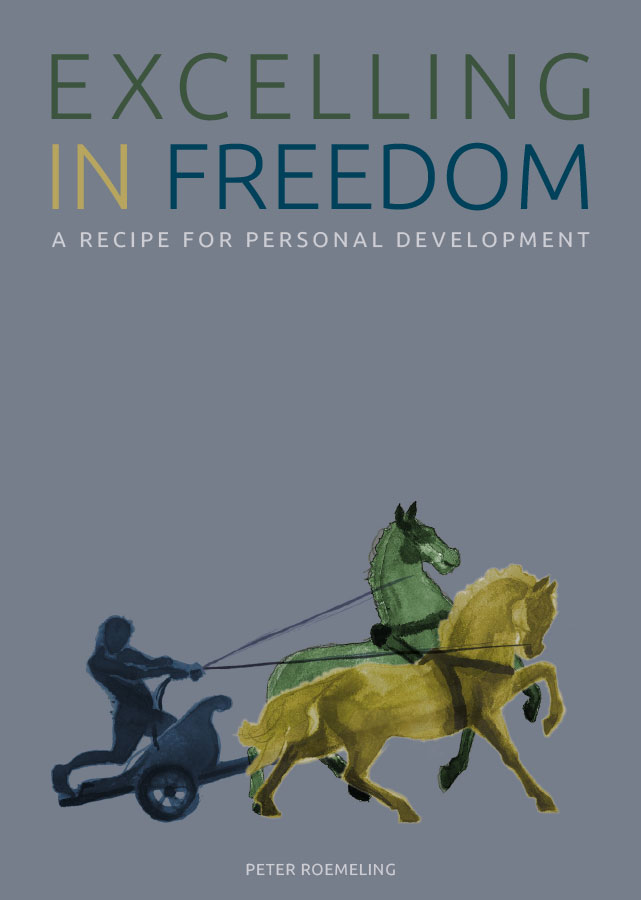