Attitudes, according to Spranger, are a sum of experiences gained through origin, upbringing, education, experience and knowledge. The appreciation of these experiences (in a positive or negative sense) causes us to cherish personal convictions. On the basis of our convictions we consider whether or not to take action in certain situations (therefore: motives). Our motives determine to a large extent through which spectacles we look at the world around us. One can also speak of world view, paradigm, a way of valuing life.

In general, the highest two or three motives determine the direction in a person’s life. In theory, it is not possible for a person to be equally motivated by all six drives.

Peter Roemeling works to improve performance by providing insight into motivators. Together with the Zwerm Group, I developed The Motivators Game to help people gain this insight in a playful and fun way. 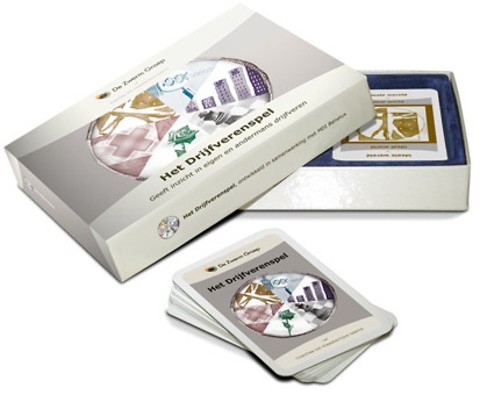 The Motivations Game game contains six motives cards (large format), on which the particular motive is explained. In addition, there are 120 playing cards. Each card is present twice and contains a word that drives/motivates someone to get moving, to put energy into something. The game can be played with 2 to 6 players.

Rules of the game

1. The game is played with two to six players.
2. The cards are shuffled and each player receives eight cards; the six large motivator cards remain face down on the table.
3. The remaining cards are stacked face down on the table.
4. Each player takes a turn to pick up one card from the stack and:
a. Then explains to the other players why he feels that the word on the card describes/doesn’t describe him;
b. From the nine cards that the player now holds in his hands, he selects one card whose word least describes him, places it face up on the table and explains his choice.
5. The next player selects one card that another player has put down or one card from the remaining stack of unused cards.
6. Rule 4.a, 4.b and 5 are repeated until all of the cards have been discussed.
7. The game ends when each player has a hand of eight cards displaying words that best describes that person.
8. Next, the players can discuss and comment on the collected cards.
9. After that, each player throws out another two cards which he feels describes him least.
10. Result: each player now holds six cards that describes him best.
11. The next step is to place the six large cards with the motivator explanations on the table and identify each individual’s motivators. The more cards there are from a specific motivator, the stronger this particular motivator is present in the individual.

You can also play the game by handing cards to the other players instead of keeping them to yourself. This will give you insight into which motivators other people see in you.